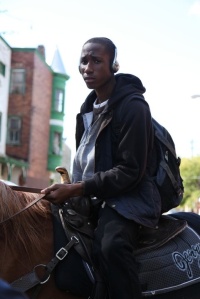 I am John Wayne is a short film that has been quietly acquiring awards upon awards for the creative story that it tells and the beautifully artistic way that it is shot. The short film has won, the Grand Jury Prize for best narrative at the Hammer and Nail film contest, and it has won a Steiner Studio Award.  The film is literally described as “a lyrical portrait of “Taco” a young black cowboy struggling with the death of his best friend.” The film lends a hand to broadening the perception of young black men. That alone makes it worthy of being featured, but it manages to be more so much man than a statement. The film has an amazing story to tell, and it is all delivered in a way that makes it almost impossible to tear your eyes away from the screen.

I am John Wayne is the brainchild of budding film maker Christina Choe. She began her career as a documentary filmmaker and has screened her short docs “Turmeric Border Marks” & “United Nations of Hip Hop” at numerous film festivals worldwide. She has received funding from New York Foundation for the Arts (NYFA), Brooklyn Arts Council and Canada Arts Council for her projects.

I am John Wayne from Christina Choe on Vimeo.

Choe recently received an M.F.A from Columbia University for writing/directing, and is currently in development for her first feature.