First there was Tiffany singing in the Malls, then there was Justin Bieber on YouTube.
Now the next big thing is waiting to be discovered through an app on your phone.

The ShowMobile app features the HitStreak channel where you can follow four south Florida teenagers, Noah, Crystal, Mariangeli, & Brian as they attempt to burst onto the music scene!

What better way to meet the rising stars of HitStreak then by embracing the technology and doing a Skype interview with all four of them at the same time.

I caught up with the young performers while in the middle of shooting their first music video together. When asked how that was going, Mariangeli answered, “It’s awesome being with all your friends doing something you love.”

Even though they are all from Miami, had performed before, and go to they same school, surprisingly they had never worked together. Each auditioned separately for a roll on HitStreak, having to dazzle the producers with their ability to sing as well as act. Once grouped, they’ve performed at several schools, but Macy’s at the Falls Mall Holiday Season opening celebration was their first major public appearance. “We work so great together. It’s so amazing. We love each other. We have so much chemistry.” Crystal says.

This original appisode is about four friends that meet up together to save a fledgling recording studio called HitStreak whose owner, Ray, is getting ready to shut down. “And it’s up to us to save it” chimes Crystal. She adds “we’re friends, but also like family.” Noah explains that Brian is the “genius of the group” because he’s the one who made the app, performs himself and records all their songs. Clearly they all like each other well enough to sing each others praises and finish each others sentences.

On HitStreak, they all use their real names even though the show itself is not about them. Crystal explains it’s “scripted based on reality.” Noah clarifies “They script the characters to who we are. They really personalize the characters depending on where we want to go in our music career and what route we want to take” For instance, right now they are performing cover tunes, but during season two they will be singing some originals. Noah went to Nashville to work with some people on songwriting. “I’m excited, you’re going to like the songs we came up with”

They plan on touring the state of Florida and hopefully beyond. Crystal makes it known that “We want to tour the world” Being on an app downloaded on phones all over the globe they can do just that without ever leaving Miami.

Be sure to download the showmobile app, watch HitStreak and watch these kinds on their quest for stardom.
http://www.showmobile.com/ 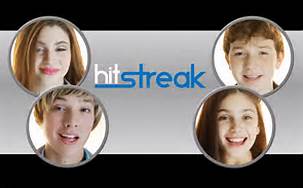 Lisa Pirro has been entertaining since the age of six. With that many years in the business, she has just about done it all. While singing telegrams really sharpened her improvisational skills, it was through being the mistress of ceremonies for many different kinds of events, that she learned to become quick witted and spontaneous. This gave her the edge she needed to land the host position for several TV shows. All of her roving reports are unscripted and off the cuff which showcase her ability to interview anyone and handle any situation.

You many have seen her at numerous interactive dinner theater shows all around Florida, or perhaps in Las Vegas as a principal singer in the stage production “Deuces Wild.” In Nashville, Lisa produced, wrote and recorded a country CD of her own original work entitled “Simply Me” She has also been a columnist for several websites.

Lisa is an active member of Hands On Broward and spends several hours a month volunteering. She has used her voice as a reader for “Insight for the blind” (audio books and periodicals) She delivered Meals on Wheels to home-bound seniors for over five years and continues to do so every Thanksgiving. Lisa has also participated in the Neighbors for Neighbors Adopt-A-Family program during the holiday season as well as participated in the Big Brothers Big Sisters Organization.

Inside this small package of dynamite explodes an enormous voice full of power, wit and attitude.† Weighing in at 85 lbs and standing only 5 feet tall, she is sure to be remembered as the “little girl with the big voice”