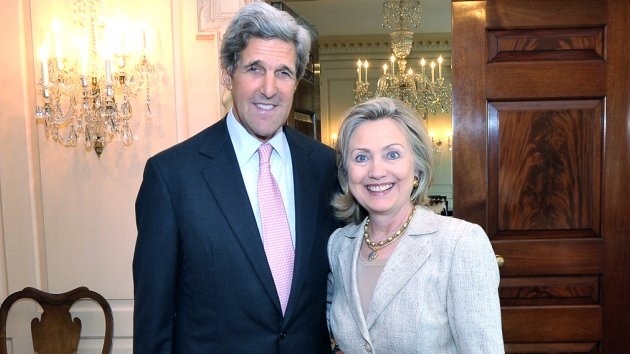 In 2016, will it be Elizabeth Warren vs. Hillary Clinton or Joe Biden vs. Hillary? Who will attempt to take on the unstoppable juggernaut of Clinton Inc? Who would take on this fools errand? A simple sampling of the political landscape reveals that there is still one candidate, largely missed thus far by pundits. There is only one candidate, on the democratic side that has both a well known longing to be President and a compelling set of credentials to be President. That person is John Kerry! The current Secretary of State has run for President before and lost. While the typical cliche in politics declares that no one likes and looser, another popular political refrain notes that once someone gets the bug to be President, it NEVER goes away! And if this week goes well for the Secretary of State, John Kerry may have the only cogent argument a candidate can make against Hillary Clinton. If this week goes well, John Kerry might be able to say that he was a better Secretary of State then Hillary. The legendary Mrs. Clinton has developed a popularity and respect apart from her husband’s efforts, based on her mythical work ethic and often heralded competency. But if John Kerry is able to forge a strong agreement with Iran that curbs their nuclear ambitions he can claim to have done what Hillary could not. The truth of the matter is of-course more complex but in politics, truth isn’t just relative, it is malleable. This argument, in combination with the admittedly absurd Benghazi accusations undermines the mythology of Clinton’s competency. Pundits are in great error to exclude John Kerry in their endless prognostications of the next election cycle. He is qualified. He is capable. And most importantly, he really wants to be President!