Each year, our hearts ache with the pain caused by the terrible events on September 11, 2001. Each year, we also feel united and we feel great pride for this beautiful country that we live in and for all of its courageous and amazing citizens. 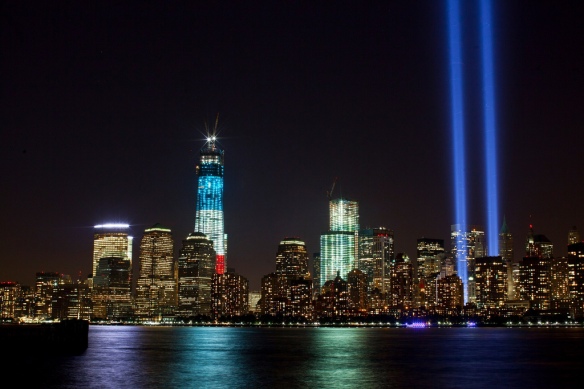 As the years have passed, we have seen the evolution of the new World Trade Center; namely the Freedom Tower. Tower One is representatively 1,776 feet tall and is now America’s tallest building with the most innovative and green technology.

Almost ready to open its doors, this magnificent skyscraper ascends high above New York City’s skyline, and its nostalgic red, white, and blue lighting shines brilliantly in the night sky.

When completed, The World Trade Center complex will have 5 new towers, an expansive retail space, a transportation hub, a performing arts center, and a memorial museum.

The National 9/11 Memorial showcases two beautiful reflecting pools and features the name of every single person who passed in the 1993 terror attacks as well as the 2001 attacks. Eight acres of land is devoted to this memorial, and over 400 white oak trees will eventually grow to 60 feet around the area, creating a stunning landscape of bright jade in the summer and multicolored foliage in the fall.

Education and remembrance will be the focus of the Memorial Museum, which will have artifacts as little as personal items donated by victim’s families to seven-story columns that were retreived from the ruins.

One of the most unique features about the 9/11 Memorial Museum is that it is underground. The reason for this is to highlight the bedrock and foundation of the original Twin Towers which did not break despite the immense amount of force collapsing upon it.

Though America has suffered a tragedy that we will never truly heal from, we have become stronger, more resilient, more hopeful, and more united.

With the completion of this new landmark, the strength, hope, and resilience of Americans will be evident to future generations, and to the rest of the world, forever.