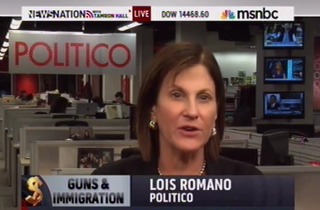 In an appearance on MSNBC, Lois Romano, The Senior Political Reporter for Politico referred to the President’s struggle to close Guantanamo Bay, as Obama’s “Political Tar-Baby”. The use of the term Tar-Baby is particularly offensive to some in minority communities but it is also a peculiar choice for a Senior Political Writer.

The term Tar-Baby can be used to describe “a Sticky Situation” or a problem that can become even more intractable the more one attempts to solve it. However, the term is also a racial pejorative that should have been particularly familiar to the Politico Writer. Former Presidential Candidate Mitt Romney found himself in a very “sticky situation” when he used  the term “Tar- Baby” to refer to an infrastructure project run amok. Former Press Secretary Tony Snow received quite a cold shoulder from the media when he referred to the seizure of phone records during the Iraq war as a “Tar-Baby”.  In fact, the current Secretary of State-John Kerry was once overwhelmed with criticism for his use of the term.

It is peculiar (to put it mildly) that a Senior Political Writer would consciously choose to use a word with such a sordid and well known history in politics. Anyone with a career in politics would be thoroughly familiar with the controversy that surrounds this word and the emotions it provokes in minority communities. There are many words in the english language that originate and are defined with offense in mind-but overtime lose their offensive meaning or character. While Snow, Romney or even Kerry may have argued that they were unaware of or perhaps forgot the meaning that “Tar Baby” has held in American history the Senior Political Writer for the Politico would be hard pressed to argue the same. After all she spent her career watching high level political officials walk into the rhetorical buzz saw.

For African Americans Tar-Baby is a horrific pejorative that was once used to vividly promote the notion of Black skin as ugly and the African American mind as slow. The term will forever be synonymous with the N-word, ignorance and insult. The Senior Political Writer for The Politico should know this. In fairness to Romano, the meaning she intended is obvious. There is no reason to suggest that Ms. Romano is a racist, however her choice of words were quite poor considering the lofty post she holds.