“Did Coco Cheat On ICE-T? We hope not and it seems that Ice-T doesn’t think so either. A fury was aroused by Coco when intimate pictures of the married model appeared on instagram with the rapper AP9. Coco is photographed dabbing delicate kisses on the rapper’s cheek. AP9 is also seen nuzzling Coco at an after-party for her “PeepShow”. When the pictures were posted, ICE-T made it clear that he felt disrespected. Ice wrote “Most of [the pics are] disrespectful and in bad taste,” . “She’s made me look and feel like s–t.” 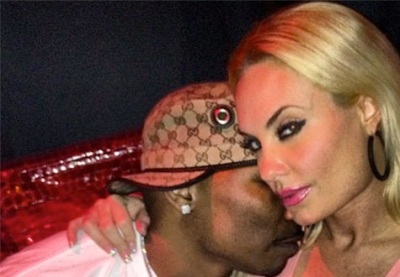 After trying to brush off the controversy, Coco wrote

“Ice is right, the pics I took with this man were in poor taste & I disrespected my husband.”  “However the pics were the only thing that happened.” She Continued

“I feel so sad. The bottom line is I love Ice & I can understand why he’s upset.”  “There’s no excuse for my actions. I’m so sorry baby & to everyone.”

Ice- T and Coco have always made an “interesting” couple but their recent reality tv show, “ICE LOVES COCO” revealed a surprisingly deep and intimate relationship. The marriage of the blond bombshell and the hardest of all rappers, has raised eyebrows for quite some time. However, their interactions on camera garnered the couple a new level of respect for their relationship. Audiences have fallen in love-with their “loving” relationship. On the show, Coco appears to be Ice T’s ideal woman. She is depicted as caring, attentive, vivacious and dedicated. She literally melts the Ice man. Ice T also displays a mature, loving and strangely wise and nurturing side. The outside world finally seemed to understand why this odd couple has lasted for nearly a decade. The series also produced a bevy of new opportunities for Coco-as well. Coco’s star has never shined as brightly. She is acting, modeling and starring in live shows. This rift in their relationship may be the first fruit of Coco’s independent ventures.

The new power couple was out posing for pictures in their first joint appearance. They dawned matching leather outfits and enthusiastically sought out the cameras. It seems that they were out to make a statement.

We count ourselves among those that admired their on-camera love affair. We wish them well!