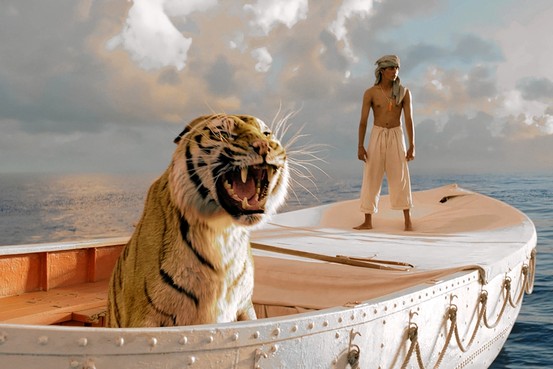 Life of Pi, is essentially the story of a young boy, ship wrecked and then forced to share a small boat at sea with a wild Bengal Tiger-named Richard Parker. The journey he embarks on is as spiritual as it is physical. The film is based on the best selling book of the same title, written by Yann Martel. The movie is a rarity, for a host of reasons. The first is that it showcases the talent of a young, Indian lead named, Suraj Sharma. The first time motion picture star has never starred in film (or anything else) but may just carry the life of Pi to a Best Picture award. The Life of Pi is garnering universal praise as one of the year’s most gorgeous films. One look at the movie’s trailer and it becomes obvious that The Life of Pi is very different from most films. In a film landscape littered with trite rehashings Pi offers movie-goers a tale of uncommon quality. While the films stunning visuals are sure to captivate, Pi is garnering praise as a character driven epic, which sets it apart in a “Hollywood” that often eschews character development. According to the L.A. Times:

“While we witness much on screen, the film rests on what Pi is feeling — his doubts, his fears, his faith. That we feel so keenly what Pi feels is a credit to Sharma in his first, and hopefully not his last time on screen, his eyes as endless as that night sky.”

The Times calls the film, “A Masterpiece”. The ReporterHerald.com says, of Pi, “You Have To see It To Believe It”. They begin their review saying ” Oh the 3-D wonders to behold in Ang Lee’s staggeringly gorgeous “Life of Pi”. “It sets a New Standard In 3D”.

Will Life of Pi win the Best Picture Award? Check out the trailer and then GO SEE THE MOVIE!