One of Africa’s most celebrated historic sites is being destroyed by religious extremists in Mali, West Africa. Many consider Africa to have been a land devoid of history and literacy. This mythology was conjured by early colonialists, desperate to justify their abduction of Africans and their lands. Standing tall, in defiance of those lies, was the great African University near Timbuktu. Timbuktu once housed some of the largest book collections and libraries on earth. 2/3 of the entire world’s gold supply traversed the deserts of Africa and passed through Timbuktu. The Djinguereber Mosque, is built in a uniquely African style with Adobe. It has stood for nearly 700 years. At one time, 25,000 students at a time would study mathematics, religion, advanced astronomy, medicine, dentistry, poetry and rhetoric. It may seem difficult to believe but African Scholars were once revered for their intellect and the University at Timbuktu was a world wide hub of intellectual thought. And now, that incredible legacy, which defied french domination and colonialism is in the process of being destroyed by Militants in West Africa’s, Mali. The militants are angered by the long history of prominence of the Sufi sect of Islam-which is a unique, mystical form of islam that incorporates music, dancing and has always found a friendly reception among Africans that seemed uniquely attracted to the less restrictive and dogmatic form of islam. They have recently decided to literally bulldoze ancient shrines, tombs and mosques dedicated to Sufi Saints and ancient African royalty. The gun men, held tourists and the remaining residents at bay with gun fire as they destroyed what remains of Ancient Africa’s intellectual heritage.

Africa has experienced several phases of destruction to the ruins that prove its long history of grand empires and intellectual history. The last involved Egypt, which built the Aswan Dam, which flooded the rich archeological sites of Ancient Nubian Kush. Nubia was once one of the world’s largest empires. Fields of Nubian Built pyramids were destroyed and the descendants of Nubian culture were relocated as the flood waters washed over their homes.

If the militants succeed, the remnants of Africa’s most enduring, literate cultures will be obliterated from record. 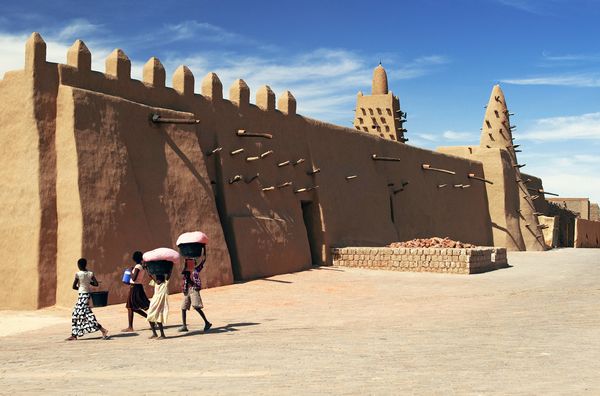