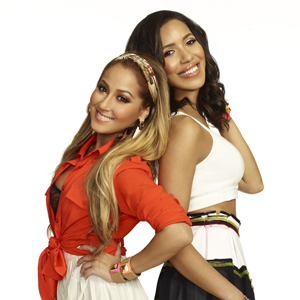 Reality TV is notoriously, un-real! The contrived nature of the shows go far beyond their typically scripted plot lines and orchestrated fist fights. In most, if not all we are subjected to men and women living total lies. They are usually not as rich as they claim to be, or as successful as the shows imply that they are. The  casts of most Reality TV shows grossly exaggerate the fabulosity of their lives and ultimately undermine the reason Reality TV was invented. Reality Shows are supposed to give us a glimpse into the lives of people we would find fascinating. We are supposed to gain exposure to world’s that we are often not privy to. Unfortunately, most shows have preferred to glamorize the daily lives of their participants and in so doing they have drained the shows of their most compelling feature: AUTHENTICITY!

WE LOVE EMPIRE GIRLS because it is one of the few shows that doesn’t try to glamorize the struggle of it’s cast: Adrieene Bailon and Julissa Bermudez. The show is fun and light-hearted, but its also uncharacteristically real. When the season began, Julissa was living in her parent’s home. She was fighting with her brother for the hall way mirror (its the best mirror in the house for doing her make-up). The producers of the show didn’t put the Television Personality up in a rented house or lavish apartment. They didn’t try to obscure the fact that Julissa is a woman that is trying to grind her way to the top. Like many minorities, she struggles to balance- holding on to her culture with making herself marketable. The producers could have hidden those awkward moments. The desire to portray the entertainment industry as Politically Correct could have led them to edit out those moments when casting agents and audio engineers wanted Julissa to ditch her accent. But they didn’t. They allowed us to see that “side” of the industry. They also allowed us to see that Julissa makes the same compromises many of us ultimately make.

The Show could have similarly portrayed Adrieene Bailon as Ne-Yo’s new “IT” girl. They could have taken the name Empire Girls and tried to portray Adrieene as a woman On-top of The World. They could have allowed her to stunt like she was running “Compound Entertainment”-Ne-Yo’s production company. Instead, they allowed us to see that she is in the midst of a struggle. We saw how she was nearly dropped and left on the side-lines. We were allowed to see her begging to get back into Ne-Yo’s Good Graces. They allowed us to see that, despite all of her early successes, she is still fighting for her dream. The show allows us to see that both of these women, are still hungry! They aren’t on top of the world, but they are intent on getting there. They aren’t fantastically rich. They walk EVERYWHERE!  And thats why we love this show! It’s real! It is probably the most Real Show In the Crowded Universe of Reality TV. Don’t get it twisted, there are definitely some “less than authentic” moments on the show but that is to be expected. It is TV after all. But it’s not excessive-pseudo glam! It’s about two girls that are grinding like the rest of us. Viewers can relate and that is why we will keep watching!