Should drugs be legalized? President Obama waded into the controversial debate during his visit at the sixth Summit of The Americas in Cartegena, Columbia. The President, responded to a question about the potential for legalization, a policy favored by many in Latin America as a way of alleviating the pressures of the narco war on beleaguered latin american nations. President Obama stated plainly that while he was personally against the prospect of legalization, he would be open to the debate.

The President has, on more than one occasion flirted with politically perilous topics. At times he has over-estimated the national appetite for (and discipline to sustain) the debates that are common-place in the halls of academia, from which he hales. I believe that this is yet another example of his professorial nature rearing its ugly, scholarly head. The President seems to believe that a fair discussion can be held in the open. He seems to believe that simply because he eschews cheap attacks and political opportunism that everyone else does as well. The President is wrong! Almost as soon as the President delivered his, off-hand, heavily conditional statement the internet came alive with declarations that the President is “OPEN TO LEGALIZING DRUGS”. In the truncated vernacular of the internet, nuance often goes unappreciated. If, then statements are also ignored. It was as if he never even said that he was opposed to drug legalization. Somehow we missed his argument, that legalizing drugs would make the drug problem worse. Such is our political discourse. Terse, unforgiving and sloppy!

I for one must agree with the President. Legalizing drugs would be a massive error, especially for many of the minority communities that often call for an end to the drug war. Its quite easy to understand the desire for such a policy. The number of minority men, taken into custody and remanded to absurdly long sentences for minor infractions of the law is upsetting and discouraging. We lose so many of our men and boys to incarceration that, like military families, eager to see an end to the war, we are tempted to leap toward any solution that might see our boys come home. The sad affair is blinding and the potential for it’s end is emotionally and intellectually confounding. But a clear mind would hesitate to embrace the solution of drug legalization. We do not need to debate the simple fact that crime, drug use, poverty and familial disintegration exist as a result of systemic cycles in all communities. Each of these, tends to feed the others. In order to understand why drugs should never be legalized, we simply need to understand that adding legal drugs to this cycle would only perpetuate it. Those of us that are active in our communities know how difficult it is to break these cycles. Why would anyone wish to strengthen them by creating, easily accessible and cheaper drugs.

In virtually every minority community, liquor stores occupy corners in near equal proportions with McDonalds. Despite the protests of residents, churches and activists, there is a constant, hovering temptation, capitalizing on folks that are down on their luck. As the financial pressures of depressed economies, and battered marriages conspire to culminate in life’s stress on the individual, the ever present reprieve is simply a corner away, in most minority communities. This has sunk the will power of many in our community. Now consider adding drugs to this. Consider how difficult it is to overcome alcoholism in communities with malt liquor billboards, and inescapable media campaigns. Advocates of drug legalization would have us impose these same temptations on populations that are most susceptible to their persuasion. Drugs may be common in many communities but legalization would herald a new level of availability. Of course advocates would argue that every person has to be responsible for themselves, but YOU have to live in a community with those that find themselves too weak to abstain. Its hard enough surviving in a difficult economy. Its hard enough to not perpetuate pathologies in our families. Let’s not add to that difficulty by legalizing drugs. 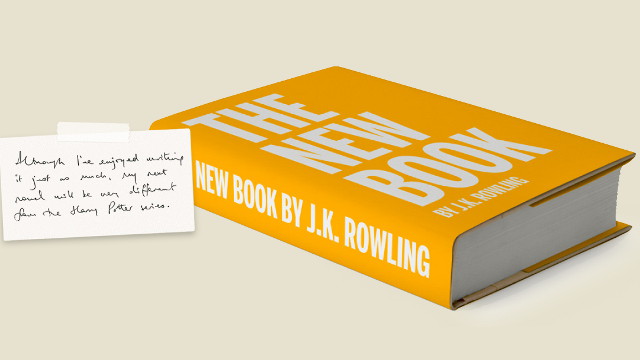 Harry Potter author, JK Rowling warned fans that her next book would be nothing like Harry Potter and she wasn’t kidding. She emphasized that “although I’ve enjoyed writing it every bit as much, my next book will be very different to the Harry Potter series“. And now that details of her new book are trickling out, its clear that she needed to prepare her fan base. The new Book, is called “THE CASUAL VACANCY” and its set in the very mogul-surroundings of a small town in the UK. Instead of magic, The Casual Vacancy is centered around the equally mirky world of politics.The new book is described as a black comedy, set in a picturesque township. In the cobble stoned town of Pagford, a dark storyline is put into motion when a youthful  Parish Councilor (the equivalent of a city commissioner), Barry Fairweather, unexpectedly dies. The death sets off a local, political war the publisher describes as the “Rich at war with poor, teenagers at war with parents, wives at war with their husbands, teachers at war with their pupils”. It is the furthest storyline possible, from the Harry Potter series. It is also sure to be a best seller. JK Rowling will break new ground by charging a whopping $20 for the ebook version of her new book. In an ebook market poised to see a decline in prices, Rowling is making an audacious move, positioning her book as a premium purchase. However, if there is any author in the world that can command such an inflated price, it is certainly JK Rowling!

The Howard Theater was once a crucial stop on (what was once termed) BLACK BROADWAY.  The famed theater was one of several venues on the royal, procession tours of elite black entertainers. Duke Ellington, Marvin Gaye, and Billie Holiday, all performed in the “largest colored theater in the world”.

The 102 year old venue, was once considered to be the one of the most exclusive  stages for America’s greatest black performers. It opened in 1910 and was often referred to as Washington’s Apollo. But while the Apollo wouldn’t become receptive to black performers until 1934 the Howard was constructed near the heart of Washington’s black community and as such, was a receptive venue for black performers. The Howard closed in 1980 and it’s structure quickly deteriorated. It’s roof fell through and water damage eroded the once beautiful site. It took 29 million dollars to restore the new theater. The new Howard is filled with HD video screens, and club-style seating. It’s Gourmet menu was designed by Top Chef, and ethiopian-born chef Marcus Samuelson. A veritable who’s who of African American entertainers have come together to celebrate the restoration of the new Howard Theater. Bill Cosby, Dick Gregory, Boyz II Men, Chaka Khan and Smokey Robinson are all involved in the re-opening. 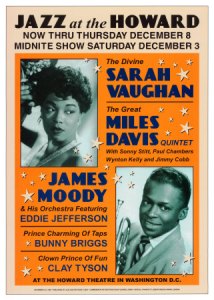 “Quiet the nausea of self-doubt, and take a Pepto Bismol.”

It’s half past midnight and I’m awake. No, I’m not out at a bar having a late night rendezvous with friends. I’m in bed staring at the dark shapes circling on my ceiling. I can feel my pulse pound and my temples throb. A cold sweat soaks my pajamas, and they cling to my clammy skin. My mind races as I try to convince myself that I am awake and not stuck in a nightmare where failure is the only option and the only road leads to nowhere. As the panic resides, I force myself out of bed and grab a glass of water. This is my body on self-doubt.

Self-doubt is sneaky. It pops up when I least expect it. Big test coming up, did I study? Doesn’t matter because self-doubt may show up in the essay portion. Did I really think I was going to finish that screenplay? It’s a waste of time because it wouldn’t be any good. Self-doubt creeps up on me like a chill through an open window. I pull up my collar, toss on a scarf, but it’s still there. It’s a master of disguise. I can never guess how self-doubt will appear next. A whisper from the unconscious beyond? A snide remark from an enemy? A piece of advice from a friend with good intentions but bad perspective? Who knows, but it will come.

I close my eyes, count to ten, and hope the fear resides. “Trust your instincts,” I tell myself. “This isn’t reality.” “Stop talking to your self,” says Self-Doubt. “Now people think you’re crazy.” I can’t escape it. Self-doubt is my shadow, and at night it camouflages itself in the corners of my room, waiting for the moment in between rest and sleep to hijack my brain. It hits me with a fury of pain and pity. I try to run, but I slip and fall down an endless tunnel and think that this is the end. Finally. But then my alarm rings, and the sun rises. I wipe the crust from my eyes and pick up the cover and sheets that ended up on the floor. It’s a new day, and I’m ready to face self-doubt in whatever form it chooses.