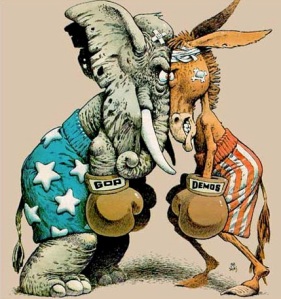 The 2012 election is approaching fast and both parties are scrambling to find popular positions that will win the support of the public. The President himself, is desperately appealing to the American people to appreciate the progress that has occurred under his leadership. His campaign is feverishly trying to anticipate the next move of his republican opponents. However, the GOP’s new “winning” position may not have been anticipated by anyone, let alone, the President and his minions. The GOP is preparing to pitch itself, as The Anti-War Party. The audacity of such a position is likely to be seen as so incredible that few in the belt way have been willing to consider it. The GOP promoted the war in Afghanistan and then the war in Iraq. Prior to leaving office, the GOP’s pundits were clamoring for George W. Bush to strike against Iran. Despite it’s willingness to fight overseas, the GOP has begun to parry, in order to foil President Obama. An increasing number of Republicans have come out, in direct opposition to the war effort in Afghanistan. The rumblings of this avalanche were initiated by the vehemently anti-war Ron Paul. Paul’s sentiments were later seconded, by failed Presidential candidate, Jon Huntsman. Huntsman was ridiculed at the time and candidates like , Rick Perry suggested that they would double down in Afghanistan. But more Republicans have since adopted the Huntsman doctrine. Newt Gingrich is transitioning to a-”pull out now”-campaign position. Loud voices in the conservative movement like Sean Hannity are also beginning to call for retreat. Their new found distaste for the war they called for, is based on a series of events in Afghanistan. Afghans recently rioted over the unprovoked attack of a U.S. soldier. The potentially disturbed, 38 year old soldier (on his 4th tour), recently massacred 16 afghans in the dead of night. A series of fumbles have become convenient excuses for the GOP to abandon the war and lay blame for its very existence on President Obama! While calling for retreat, an increasing number of republicans are basing their opposition on President Obama’s inability to fight the war effectively. By making themselves the party that wants to withdraw from Afghanistan and President Obama the defender of the decade long war, the GOP may have just stumbled upon a message more potent then the lack of job creation in the country.