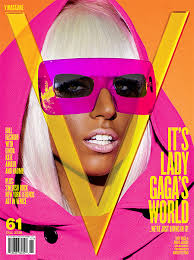 Lady Gaga recently took her gloves off to pen a few comments about Cathy Horyn for her column at V magazine, according to an article from Elle magazine. The New York Times‘ fashion critic recently criticized Versace’s excitement over dressing Gaga writing, “Be choosier, Ms. Versace.” While Gaga makes no mention of the incident, she does take the opportunity to attack Horyn’s approach to criticism. “It’s much more challenging to reckon with and analyze a work. It
requires research, but maybe no one does their research anymore.” Gaga goes on to encourage Horyn to “employ a more modern and forward approach to criticism, one that
separates [her] from the average individual at home on their laptop.”